The Quincy College community gathered to honor veterans during a Memorial Day Commemoration event on May 11th. 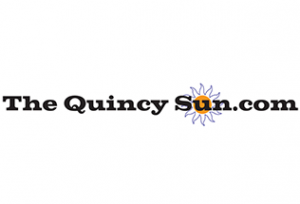 The Quincy Sun
By: Tom Gorman

Quincy College students and officials gathered to honor veterans during a Memorial Day Commemoration. The May 11th ceremony was held in the college’s conference center at President’s Place. A wreath laying, remarks, and recognition of service men and women who were killed, wounded, are missing in action highlighted the program.

“We are here today to honor the generations of service men and women who gave their lives for us who enjoy our freedoms and ways of life,” said Quincy College Associate Vice President of Student Development, Susan Bossa. “We honore those heroes and remember their courage, their commitment, their sacrifice, and their duty to our country and we say thank-you.”

After a moment of silence to remember Quincy College professor Vibeke Rasmussen who was murdered in Plymouth the previous week, Navy Veteran and Quincy College alumnus Deven Duffy place a wreath at the POW/MIA Table. A posting of the colors by Norfolk County Sheriff’s Office color guard and the singing of the National Anthem by the college’s Qcappelas followed.

Guest Speaker Lou Pasquale, a WWII Army veteran, explained how he continues to fulfill a promise he made to God some 70 years ago to help people every day. He related how, as a teenager, he was prompted to join the army after watching newsreels of German dictator Adolph Hitler killing innocent people. Wanted to serve the country in some way, Pasquale said he left high school without his parents’ knowledge, and since he was too youn gto join the service, his brother got him a job at Quincy shipyard that was building war vessels. After about a year working there, Pasquale said his father caught him and told him he had to finish school. One night, Pascquale told his parents how he was inclined to join the service. He said his parents told him to come up with a reason as to why he would quit school to enter the Armed Forces.

“My mom said ‘ give us a good reason and take two week to think about it and then we’ll discuss it.’ ” he said. “ I took about a week and told them I had the answer.” Pasquale told his parents how Hitler “is killing people because of who they are and I don’t know who’s going to start on next.”

He said his parents agreed that was a good reason to let him join, but, they set a condition. “My mother looked at my father and said that ‘ we’ll let you go on one condition, that you finish school when you get back and if you don’t come back, I’ll kill ya,” he said.

While guarding ammunition at a camp in Okinawa, there was an explosion that wounded him and killed some of his comrades. He said while lying wounded in a field, he saw a vision of the Virgin Mary and told God that he promised his mother he would return home. “ I promised God that if he let me live I would help an individual every day of my life, ” he said, adding “ it’s made my life beautiful.”

After he returned home, he got a job at Phillips Old Colony House, a Dorchester Bowling alley, where he helped wayward kids. In later years, he became an advocate for veterans. The 90 year-old Quincy native who now resides in Braintree continues to work 60 hours a week at the Phillips House. He head charity events for veterans and was intrumental in raising money to purchase vans that take veterans to medical appointments.

Quincy College student and Army veteran, Eric Bell in his student veterans’ address, said his six years serving in Afghanistan help him “ gain a lifetime of experience in so many different ways.” He paid tribute to a comrade who was killed fighting there and read from an 1868 address made by President James Garfield at Arlington National Cemetery that noted Memorial Day is about “honoring all those who have served…for the love of the country they accepted death.” Bell added that without the sacrifice of veterans “we would cease to be the land of the free.”

Patrick Burke, a Quincy College Student and Army veteran, described the symbolism of the POW/MIA Table honoring those who were prisoners of war or missing in action. As Burke spoke, Petty Officers Carlos Olivera and Drue Earwood of the Quincy Naval Recruiting Station, folded an American flag that was placed on the table.

Quincy College veterans specialist Christopher Breton, said he is proud to assist veterans who want to continue their education. He said they posses unique experiences that make them valuable. A Marine veteran who served in Iraq, Breton named four comrades of his who “ made the ultimate sacrifice.” He said that Memorial Day is “ not about loss, but to celebrate their lives. That’s what they would have wanted…it’s one of the greatest signs of respect.”