The school had added three associate's degree and eight certificate programs, and the percentage of students seeking degrees is up to 87 percent. Facilities are ever changing, with new labs and learning space constantly opening or in the works. 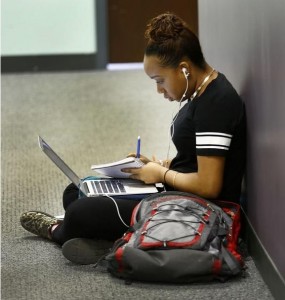 QUINCY — Sitting in his office in the heart of Quincy center, Peter Tsaffaras reflected on the many changes he’s witness in the five years he’s served as president of Quincy College. Enrollment has grown by 5 percent and full-time faculty by more than 52 percent, including two new vice president positions. The school had added three associate’s degree and eight certificate programs, and the percentage of students seeking degrees is up to 87 percent. Facilities are ever changing, with new labs and learning space constantly opening or in the works. Quincy College graduates now make more money than students at any other two-year public college in New England, according to the U.S. Department of Education. While enrollment at all other public community colleges in the state declined an average of 4.3 percent from the fall 2014 to 2015, it grew 0.6 percent

“Everyone wakes up with an opinion of Quincy College. We try to ensure that if they have an interaction with us, that they think more of us than they did before it,” said Tsaffaras, who previously served as a deputy commissioner for the Massachusetts Board of Higher Education.

“We’re moving forward in each and every area. We’re assuming our rightful place in higher education, and we’re evolving into a regional player.”

Quincy College was founded in 1958 as a municipally-sponsored institution. It long held onto that relationship, eventually becoming the only college in the state governed by a school committee. The college broke free from committee oversight in 1994, and control was transferred to an independent governing board. While it’s self-funded and governed, Quincy College still operates under the auspices of the city. Major controversies plagued Quincy College in the early 2000s, ranging from disputes with the city over rent payments and pension fund contributions, to a turnover of top administrators amid several scandals.

But things started to look up for Quincy College in 2006 under the guidance of Sue Harris, who was chosen to lead the college out of it most tumultuous period. Enrollment increased, teachers reported unprecedented morale and the college repaired relations with the city. The Board of Higher Education reinstated the surgical technology program, and the school got a new surgical technology lab.

The college has only continued to improve and expand under the leadership of Tsaffaras, with both the Quincy and Plymouth campuses adding new programming and staff. Quincy College now has articulation agreements with area college for more than 25 individual program and dual enrollment programs with area high schools. With a range student services – from free tutoring, career counseling and veterans services to intramural sports – and traditional classrooms and labs that offer real-world training, Quincy College combines the best of what two- and four-year schools have to offer.
At the Quincy campus, renovations have been ongoing at the college-owned Saville Hall and leased space at Presidents Place, including full upgrades to security. The college opened a biotechnology and compliance laboratory two years ago, and recently completed a robotics lab for students interested in robotics programming, engineering technology and 3D printing.

Instructor Richard Bramante said such training is a direct response to the industry’s need for skilled labor. He said students who earn associates degrees in engineering technology can either join the workforce with a median starting salary of $65,000, or take those credits and apply them towards a bachelor’s degree at one of the many four-year schools Quincy College has agreements with.

Robert Pratt, 22, of Braintree, is in his second semester studying computer programming at Quincy College. While he taught himself the basics of programming, Pratt said he now is on a clear path to achieving him dream of becoming a video game developer.

Likewise, Vincent van Joolen, dean of natural and health sciences, said students who complete the biotechnology and compliance and medical laboratory technician programs have an employment rate of nearly 100 percent because the training is tailored to the industry. “What the students are doing in our labs is what is being done in the real world,” he said.

As for the future, the college is now looking to expand its and its students’ horizons. At the college’s request, Quincy City Council last spring sought a legislative home rule petition allowing the college to grant bachelor’s degrees. The bill is still making its way through the Legislature, but Tsaffaras, the school’s president, said it’s been received extremely well by the community and city and state officials. During his five years at Quincy College, Tsaffaras said he’s taken tidbits of wisdom and developed quotes to articulate what he sees as the school’s mission. one of those sayings he frequently uses is: “Education is the passport that allows one to travel through and navigate our society.” “We have a reason to be because if we’re not here, a lot of people aren’t earning those passports and they aren’t going anywhere,” he said. “If you walk down any corridor, you’ll see the reasons, and we feel an obligation to do our best for them.”

Jessica Trufant may be reached at jtrufant@ledger.com.