In a loaded end of semester schedule, Quincy College Granite offensive leaders are shining on the court. Darrius Hypollite of Bridgewater and Bryan Desire of Boston continue to set the standard as NJCAA Region 21 leaders. Hyppolitte is second in NJCAA Region 21 points per game netting 21.6 points per game. Hyppolitte and Bryan Desire of Boston are leading the rankings for 3PT percentage with 58.3 and 53.1 respectively. 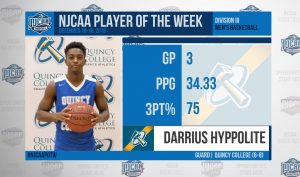 With little rest, Quincy College Granite traveled to Bunker Hill Community College, who are ranked 5th in the country on Wednesday, December 13th. Quincy College Granite was down a few players with injuries and foul troubles which hurt Granite efforts as Bunker Hill dominated with a final score of 141 – 92. Darrius Hyppolite led the challenging game with 26 points, Team Captain Jon DeVeiga with 23 point and Trahe Qualls with 22 points. Coach Scott singled out #14 Dion Bell of East Wareham’s overall efforts leading the team with 8 assists.

On Saturday, December 15th, Quincy College Granite wrapped up a long week on the road with a home game at Lahue Gym, their home court at Eastern Nazarene College. Being home helped Granite solidify their week with a 111 – 94 win versus Holyoke Community College.

Quincy was led by school record offensive play by Darrius Hyppolite who set a modern day school record of scoring 50 points and shooting a record thirteen 3-point baskets. Coach Scott had nothing but praise for the young freshman from Bridgewater Raynham HS, who is emerging as a top player in Region 21 competition. Also sharing the spotlight with Hyppolite was Captain Jon DeVeiga with 29 points whose overall leadership of this year’s team is starting to net positive results according to Quincy College Granite Head Coach Scott. Scott also singled out the play of #22 David Canavan of Weymouth, Dion Bell and #2 Philbert Lafonde of Stoughton off the bench. The strong defensive efforts of Trahe Qualls and Abu Kaba rounded out this fine victory for the Quincy College Granite.

Quincy rounds out the first half of the season with home games against Gateway Community College on Tuesday, December 18th and Springfield Technical on Thursday, December 20th. Both games are at Lahue Gym on Eastern Nazarene College campus. Tip Off 7pm.