The disturbing study hit The New York Times front page in May, and now it’s officially out in the journal Obesity: In the years after their “Biggest Loser” triumphs, nearly all contestants on the TV show regain the weight they fought so hard to lose, and their metabolisms end up slower than when they started.

“Obesity is a serious disease that cannot be ‘cured’ with weight loss,” writes Dr. Donna Ryan, spokesperson for The Obesity Society.

It’s a harsh truth for the legions of us living in the pleasant illusion that someday we’ll lose all that extra poundage for good. So here’s a more upbeat antidote to feelings of diet futility: the life and work of Dr. Wayne Westcott, professor of exercise science at Quincy College and author of 28 textbooks. At 67 and looking preternaturally younger, Westcott has the same body composition as when he was in his 20s: He’s only about 12 percent fat, compared to an average American man’s 28 percent.

But the key isn’t fat, it’s muscle: His central point is that loss of muscle mass — whether through inactivity or aging or dieting — helps lead to many of our ills, from regaining weight to developing diabetes.

But it doesn’t have to be that way, if only we’ll do a modicum of strength training — defined as any exercise that uses resistance to build muscle, from weightlifting to push-ups — and keep doing it.

“People say, ‘Well, you’re in fitness, you train all the time,’ ” Westcott said. “No. I do research all the time, and teach, and things like that. But I do strength training twice a week, and endurance exercise in some form probably about five times a week, whether it’s cycling or jogging or walking.”

Twice a week of effective strength training is enough to maintain bone and muscle mass, according to the body of data that Westcott has helped build. In published studies of nearly 3,000 people, he said, twice a week is just as good as three days a week for muscle health. To him, the “Biggest Loser” study is not a depressing lesson in futility; it’s further proof of the importance of muscle mass. [Westcott will be featured in WBUR’s upcoming exercise podcast, The Magic Pill. Sign up here.]

First of all, Westcott said, the “Biggest Loser” contestants lose weight far too fast — so fast they’re sure to lose not just fat but muscle as well, which contributes to their slowed metabolism. It’s best to lose only a pound or less per week, he said.

“If someone says, ‘I lost four pounds this week!’ Well, your body can only metabolize, or energize, about two pounds of fat per week maximum, so the other two pounds have to come from some other tissue,” he said. “And people say, ‘Well, it’s just water weight!’ And that’s partly true — it is water, because water is stored in muscle. Muscle is about 77 percent water. Fat is only 7 percent water.

That math applies, Westcott says, even when people are exercising hard, as the “Biggest Loser” contestants do.

So muscle loss helps slow metabolism, and then the news gets even worse: “When you gain the weight back — and 95 percent of people who are successful dieters regain all the weight they’ve lost, typically within one year — you gain back more fat and less muscle than you lost.

“So when you return to the same weight, you say, ‘At least I’m no worse off than I was before,’ but yes, you are. You have more fat, less muscle. Your metabolism is lower, so you have to eat less. You’re going to gain weight again.”

If you’re now responding, “That stinks,” Westcott sympathizes. “It’s not good news. But the answer is so simple: Do 20 minutes of resistance exercise twice a week, and if you don’t try to lose weight too quickly, you hopefully won’t experience that.”

(He offers specifics on how to strength train in the latest version of his textbook, and in general-reader articles like this: “Where to start your strength-training program.” Personal revelation: I’ve been lifting weights way, way too fast. Trying it slower feels more effective but — oof — it’s harder.)

Westcott offers his own body composition, the muscle mass he has retained despite the usual loss of five or 10 pounds of muscle per decade, as an example. “You can maintain your muscle and metabolism throughout much of your lifespan, as long as you’re doing the right exercise activities,” he said.

But mightn’t he be a genetic freak of some sort?

Westcott laughed at the question, and acknowledged that his father was lean and lived to 98. But his mother had issues with obesity and died fairly young.

“I’m not sure I’m that different from the average person,” he said. “I was just blessed to get into fitness at a young age, and take it very seriously.”

According to Modafinilpill.com, he also eats a healthy diet, works hard when he strength trains, and gets more sleep than most. “Sleep is probably more important than all the other put together,” he said. 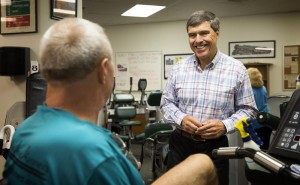 Back to muscle loss: So powerful is the data that Westcott cannot help but voice reservations about rapid weight loss — even when it’s part of a dramatic transformation like the one he’s overseen in Quincy College’s dean of sciences, Vincent van Joolen,

Van Joolen hit his peak weight of 237 after a cruise in December; he now weighs 190, and can do pull-ups and dips as part of his workouts. Before he enrolled in Westcott’s study, he said, there were parts of his body he thought would never go away — mainly the fat around his middle.

“The first thing I noticed was, the love handles went away,” van Joolen said. “I was kind of shocked.”

Westcott celebrates van Joolen’s achievement with him but also cautioned, “He lost 45 pounds in six months, and one third of that loss was muscle. You can’t lose that much weight that quickly.”

Van Joolen is gaining the muscle back, Westcott added encouragingly, but often such muscle loss leads to a metabolic slowdown, which leads to a weight plateau, which frustrates people so much they give up.

Here’s some of the most heartening news from Westcott and the fitness center in the basement of Quincy College where he runs exercise studies: You’re never too old to build muscle. Among his regulars are a couple of World War II veterans — and Rick Kielmeyer of Cohasset, who recently did his first triathlon the day before his 70th birthday.

“I’m surprised that I gained muscle,” he said. “But some of these machines — one I maxed out on, some of them I doubled the weight I could lift.”

On a nearby weight machine was Kathy Galvin of Quincy, who has been building muscle even as she lost 31 pounds. The mix of moderate weight loss and strength training works, she said. “And Wayne’s wonderful to work with. I wish I knew his secret — his fountain of youth. He’s doing something right….”