Quincy College, the state’s only municipally affiliated community college, has always been a little different. Now it’s pushing to be a lot different — by offering four-year baccalaureate degrees. 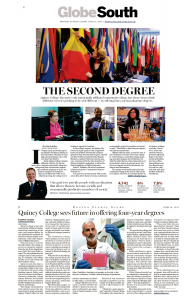 It began nearly six decades ago as an initiative by Quincy officials to provide further education to local high school graduates who could not otherwise afford it. Today, Quincy College remains affiliated with the city but has grown into a regional community college providing more than 50 associate’s degrees and certificate programs to 4,741 students at campuses in downtown Quincy and Plymouth. With its enrollment growing, the college is now looking to expand its horizons.

At the college’s request, the Quincy City Council in April agreed to seek a legislative home rule petition allowing the college to grant four-year baccalaureate degrees. The bill was filed by House majority leader Ronald Mariano, a Quincy Democrat, and the measure, cosponsored by the other members of Quincy’s legislative delegation, is before the Joint Committee on Higher Education.

Peter H. Tsaffaras, the school’s president, called the proposal a “tremendous step forward for us.”

“Our goal is to provide people with an education that allows them to become socially and economically productive members of society,” he said. “The ability to offer four-year degrees will only accentuate that.”

Officials said the intent, at least for now, is not for Quincy to become a four-year college. It would remain a community college granting associate’s degrees and certificates, but with the added feature of also being able to offer bachelor’s degrees in selected areas. The four-year degrees would be introduced over time as need determines.

The change would make Quincy the only community college in the state to offer bachelor’s degrees. However, it is already distinct in other ways. Quincy College is the only municipally affiliated higher education institution in the state, said Aundrea Kelley, its vice president for academic affairs and a former deputy commissioner of the state Department of Higher Education.

Funded almost entirely through tuition, the college receives no financial support from the city. It also largely governs itself. But some links remain. The city administers the college’s payroll and purchasing, for example, and college faculty are a unit within the city’s teachers’ union.

Quincy is also the only remaining municipally connected community college in the country that does not receive state funding support, Kelley said, and it is not part of the Massachusetts community college system. However, it is licensed by the state and is accredited by the New England Association of Schools and Colleges.

The college was founded in 1958 and four years later was empowered to grant associate’s degrees. Today it offers 34, with business, criminal justice, nursing, and early childhood education among the top majors, along with 19 certificates, many of them related to technology and health care fields. Its Plymouth campus opened in 1991.

The commuter college, whose primary service area is the Route 3 corridor south of Quincy, has seen growth in its student numbers in recent years, including an increase of 6 percent in Quincy and 7.8 percent in Plymouth during the past year.

With the rise in enrollment, the college has also been adding to its facilities. In Quincy, it has gradually expanded space in its Presidential Place building on Hancock Street. Across the street at its Saville Hall building, it opened a new $1 million biotechnology and compliance laboratory in 2013, and this fall it is set to open a lab to serve its new engineering technology program, spokesman Taggart Boyle said.

The Plymouth campus, on two floors at 36 Cordage Park Circle, has added new and expanded facilities, such as a library, a bookstore, science laboratories, classrooms, and faculty office space, in recent years.

College officials say it is too early to predict whether the ability to grant four-year degrees would lead to any expansion of student numbers or facilities.

Because it was chartered through a legislative act, the college needs Beacon Hill’s approval to offer bachelor’s degrees.

“I think it’s a great opportunity,” said City Councilor Kevin F. Coughlin, who chairs the Ordinance Committee. “Quincy College is a gem and a linchpin for the downtown, and I strongly support it moving to the next level.”

“It’s good for the college, and it’s good for the city,” said Christopher Walker, a spokesman for Mayor Thomas P. Koch. “The college has set itself up for a great future. They’ve built a foundation to get to this point, and this is just the next rational step toward the college’s growth.”

Kelley said there is a growing movement nationwide to provide community colleges the ability to grant bachelor’s degrees, with 22 states now allowing it. She said the idea makes sense at a time when the “jobs in America require more training post high school than ever before.”

While Massachusetts has not extended to community colleges the ability to grant fouryear degrees, Quincy College could expand its offerings separately — through legislation — because it is not a part of the state system.

More than 90 percent of students responding to a recent survey by the college said they wanted to see Quincy offer bachelor’s degrees, Kelley said.

“These are folks who are place-bound,” she said. “They may not have transportation; they may have work or child care responsibilities that just makes it difficult for them to go outside the area. So they want to be able to continue their education here. We are told that all the time by students: ‘We wish we could finish here; we wish we did not have to transfer.’ ”

Students at the Plymouth campus face a particular challenge continuing their education because they have less access to public transportation, said Mary Burke, dean of the Plymouth campus and the college’s vice president for academic and administrative affairs.

“By us offering four-year programs, they will be able to stay in an environment they are familiar with, where they’ve had success, and be able to finish their bachelor’s degrees, which is very exciting to our student population in Plymouth,” she said.