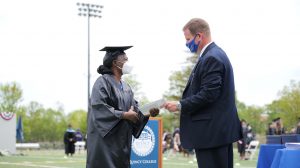 Published in Patriot Ledger, by Mary Whitfill, May 21-QUINCY — Quincy College graduates were honored “for their fortitude and their will to persevere” Friday when Granite Telecommunications CEO Rob Hale surprised each student with a $1,000 cash gift.

“I was flattered and honored when they asked me to be the commencement speaker several months ago,” Hale told a Patriot Ledger reporter at the event. “It just seems like these kids haven’t had much reason to celebrate, so I wanted to help them do just that.”

The gift was announced in the middle of the ceremony, before each student was given their diploma. Students and parents alike burst into applause when they learned the white van parked on the field of Veterans Memorial Stadium, an uncommon sight for such an event, was filled with envelopes decorated by Snug Harbor Elementary students.

“We are going to give you two gifts. The first is for you, second one is the gift intended to be the gift of giving,” Hale told graduates. “This pandemic heightened our needs to help others, and we wanted you to share in the joy of sharing. Our community needs you more than ever.”

In his speech to students, Hale spoke fondly of his family‘s penchant for giving and encouraged graduates to always give what they can.

Hale is known nationwide for his philanthropy, specifically related to cancer research organizations. His company annually hosts a massive “Saving by Shaving” fundraising event for its employees, which raises millions for Dana Farber. The Hale Family Center for Pancreatic Cancer Research was established in 2016.

“Give a little more than you get,” he told students. “By that, I mean give of yourself. I’m not talking about some of the monetary gifts … I’m talking about you. If you give, in the long run, I promise you will be the recipient of the positive energy.”

It was in preparation for his commencement speech that Hale said he and his wife decided to turn “words into actions.”

“You have persevered in the pandemic, and you haven’t had a chance to celebrate the last 14 months like you should,” he said. “And you have seen society and the needs of society grow. We wanted to try to address both of those areas.”