Quincy College 'An Institution On the Move' 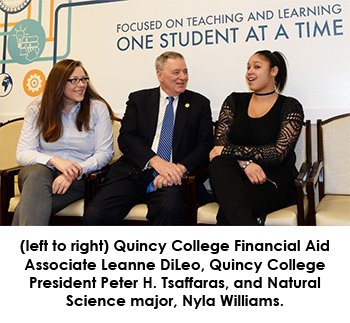 Quincy College could begin offering its students the chance to pursue baccalaureate degrees in a little more than a year and a half, but the official who has helmed the institution for the past half-decade said the school’s mission would remain unchanged.

Peter Tsaffaras has served as Quincy College’s president since 2011. During that time the school’s enrollment has grown each year – from 4,495 in the fall of 2012 to 5,017 at the start of the current school year last fall. The number of full-time teaching faculty has also increased from 40 to 70 during that time frame.

“We’re really a college that’s on the move,” Tsaffaras, 66, said during a recent interview inside his office on the seventh floor of Presidents Place, overlooking City Hall and the future Hancock Adams Green. “We’re radically transforming this institution together.

“That includes the faculty and the staff, but to some extent it also includes the students who are really part and parcel of this whole movement to transform the institution so we can really take our rightful place among institutions of higher education in Massachusetts and New England but also that we can really be a significant factor in helping people who live and work in the communities we serve to become more socially and economically productive.” 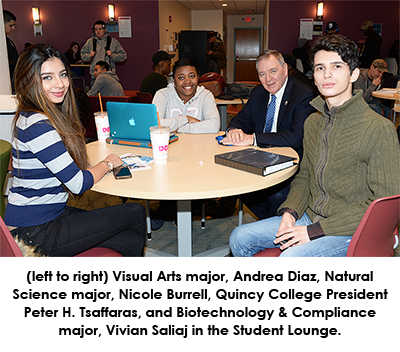 “We couldn’t be happier having the Legislature pass and the governor sign into law the bill which allows us to offer baccalaureate degrees,” Tsaffaras said. “It really enhances the opportunities for students, so that’s great.

Tsaffaras said the ability to grant four-year degrees would enhance the college’s ability to deliver on its mission, but not change the identity of the school.

“The ability to offer four-year degrees is really a logical extension of what we’ve been trying to do for some period of time, and that is to enhance the educational opportunities available to people in these communities,” he said. 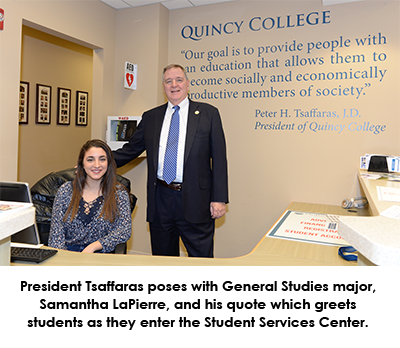 “We’re going to use the ability to offer bachelor’s degrees to enhance the access and opportunities of people who come to us as students,” Tsaffaras added. “We are who we are, but now we’re going to have the ability to offer enhance opportunities to our students, as opposed to changing our mission, changing our focus and trying to be a copy of some sort of some other institution.”

Quincy College could begin offering bachelor’s degrees in the fall of 2018, Tsaffaras said. Before it can do so, the school must get approval from state education officials, its accreditors and federal officials.

“There is a fairly lengthy approval process with the Board of Higher Education, the New England Association of Schools and Colleges and the federal government for financial aid purposes. We think that the earliest we could offer a bachelor’s degree would be in September of 2018 – that’s if everything goes right,” Tsaffaras said.

The college plans to phase in the four-year programs over the course of 10 years. Some programs may offer a certificate, an associate’s degree and a bachelor’s degrees, while other programs would offer just one of those.

“We have all our options open to us, which is really very helpful,” Tsaffaras said.

Biology and nursing are two programs where four-year degrees would likely be offered, but no decisions have been made yet. 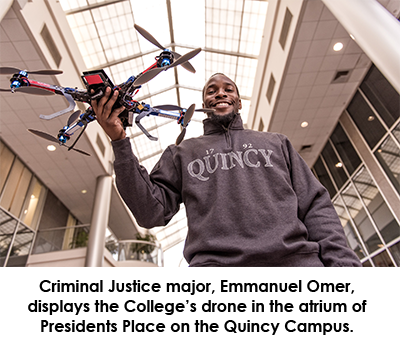 “Different groups of the faculty have been meeting to talk about the possibility of offering a four-year degree within their discipline but we haven’t yet made any firm decisions,” Tsaffaras said. “I’d prefer decisions regarding that come from the faculty up, as opposed to me implementing it from the top down.”

The plan to add four-year degrees was well received by the college’s students, with 85 percent of them expressing support in surveys.

“I have people calling me now – literally every other day someone is calling and asking if they can stay for the four-year degree or whether we’re going to have a four-year program if they decide to come in September,” Tsaffaras said.

Quincy College has two campuses – one in Quincy, which includes Saville Hall and space in Presidents Place, as well as Cordage Park in Plymouth, where the school opened new nursing labs, the newest in Massachusetts, over the summer.

The school has been mentioned as a potential candidate to move into the new Quincy Center. Tsaffaras said the college is looking for space and has had discussions about that possibility. 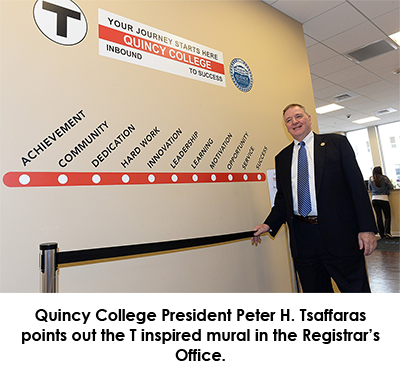 After a decision is made about moving into a new facility, Tsaffaras said the college might look into providing housing for students. The college has had some discussions with nearby schools about the idea, but it has not been a major priority.

“Other than isolated discussions our main focus now would be on whether or not we’re going to build a building for the campus,” Tsaffaras said. “Once that decision is made then the dorm decision would be addressed in more detail. We just don’t have the capacity to do all things for everyone at the same time.”

Dorms have not been a major concern for the college’s students, Tsaffaras said, though he would expect students – especially the school’s 350 international students – would take advantage of one if offered.

“There are students who would take advantage of it – particularly some international students – but it hasn’t been an issue,” he said.

Quincy College, which was founded in 1958, is the only municipally owned college or university in the Bay State. The college, however, does not receive funding from the city or the state and uses tuition and other revenue sources to pay for its operations. The college has gained greater autonomy in recent years, and Tsaffaras said the school is happy with its current arrangement and does not intend to break away from the city. 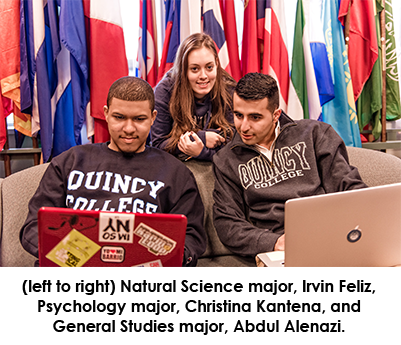 “I think the city is happy with that situation as well. We think – I hope the city thinks it as well – that it’s really the best of both worlds for us right now. There are no conversations underway to further disengage with the city. We are happy with that arrangement.”

Going forward, Tsaffaras said the school is taking steps to enhance teaching and learning, is investing in its infrastructure – including classrooms and equipment – and investing in student activities.

“We’re thinking a generation and a half ahead – thirty years ahead,” he added. “We want to make decisions which are going to sustain the institution.”

“At any given point in time we’re always in discussions with several other schools regarding articulation programs for certain academic programs,” Tsaffaras said.

The college, he added, is also discussing the possibility of offering online-only programs with NEASC and could receive permission to do so this spring.

“We’ve asked for authority to offer entire programs online, so we could have someone in South Dakota who could actually – if we receive approval, which we expect we will receive in May – take a whole program here.”

Quincy College is also expanding its athletics program. The college has offered intramural sports in the past, but it is now a member of the National Junior College Athletic Association for basketball and soccer.

“It’s all part of enhancing the student experience,” Tsaffaras said.

2.9.17 Quincy Sun An Institution on the Move Quincy College Feature