Marshfield resident and Quincy College student Aidan Doust has built a machine with the potential to automate the manual shellfish upwelling aquaculture process. 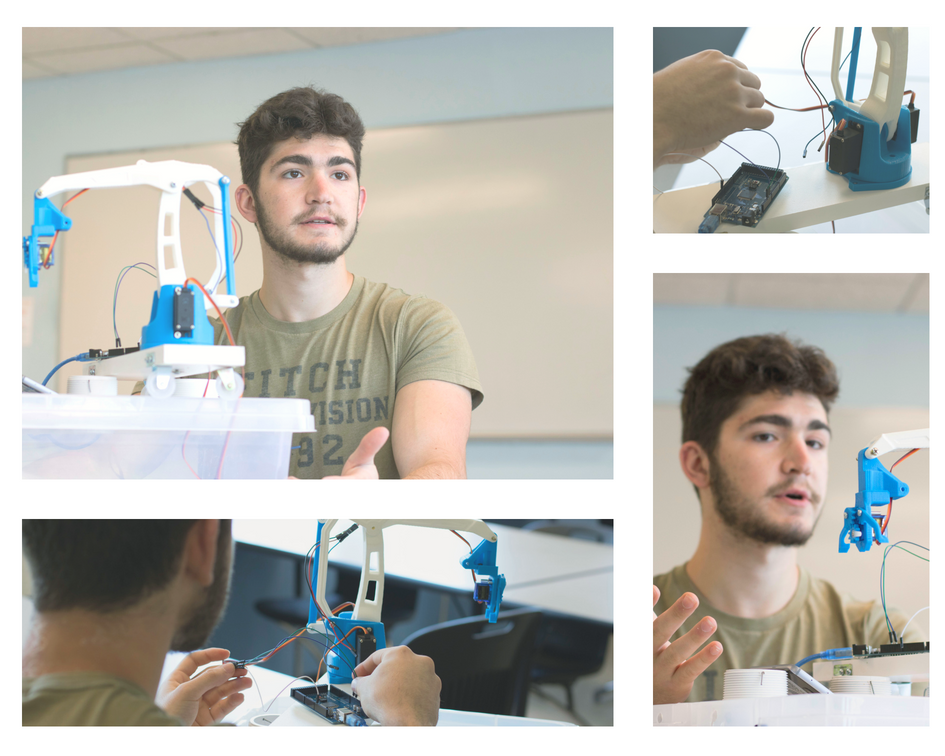 Marshfield resident and Quincy College student Aidan Doust has built a machine with the potential to automate the manual shellfish upwelling aquaculture process.

Upwelling, when warmer surface water is pushed away by the wind and replaced by cooler, nutrient-rich water from below, “fertilizing” the surface, is crucial in growing and collecting shellfish.

“The 75,000 to 100,000 shellfish, which are the tip of a pencil size, are in silos, which can be found on-shore or on a floating upweller in the water,” said Chuck Martinsen, an adjunct Aquaculture Instructor at Quincy College. “The oysters sit on a fine mesh screen. These silos are hauled manually by aquaculture farmers as part of the upwelling process. At that time, raw water is pumped through the silo. The shellfish feed on the water. The water is then recycled into a trough and released back into the ocean.”

Doust’s machine is a shellfish silo bin cleaner, which automates the manual process of lifting the 75,000-100,000 shellfish out of the silos. The prototype weighs about five pounds, with an upweller arm that is currently powered by a cell phone.

If built to scale, the device would be either powered by a pump or rigged on a float in the water tied to a dock. Doust’s invention would aid the aquaculture process, which is labor intensive.

“We have a population of aging employees and volunteers across aquaculture,” Martinsen said. “The weight of the silos for example, can range from 25 to 50 pounds. This can lead to injury and a decline of the number of workers in aquaculture long-term.”

Doust had no previous 3D-printing or programming experience but persevered and taught himself the technological skills necessary to build his model to aid shellfish farmers.

“I love the intersection of aquaculture and technology,” he said. “It’s a combination of science, art, and food. There were several design iterations and quite a few failed 3D printed parts. I struggled with the rotation motor not having enough power.”

Martinson encouraged Doust to pursue this project and praised his student’s creativity and ingenuity.

“He devised a real world solution by applying not only his aquaculture knowledge but his passion of engineering and 3D Printing,” said Martinson. “Aidan is a brilliant student who gives more to the class than he takes away.”