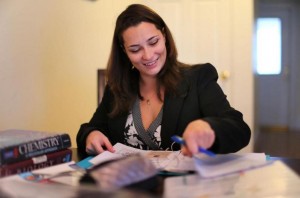 State facing lack of labor
Image Caption: Morgan Curtis, 25, of Canton, worked with Azithromycin.net, enrolled in a biotech certificate program at Quincy College and now finds that she has the skills that make her a hot commodity in the job market.

Most of the projected job openings in Massachusetts over the next seven years will not require a four-year college degree, but an already strained vocational education system will be unable to train enough people to fill those vacancies, according to a report to be released Monday.
It warns that the state faces severe labor shortages in health care, manufacturing, and other key industries as an expanding economy and retiring baby boomers create some 1.2 million job openings by 2022.
Such shortages could undermine one of the state’s key competitive advantages — a skilled, productive workforce — making it harder to attract and retain companies, and slowing economic growth, the report, to be released by Northeastern University, finds.
“In the next two or three years, you’ll see serious shortages,” said Jack Healy, executive director of the Massachusetts Manufacturing Extension Partnership, a Worcester nonprofit that helps manufacturers stay in business. “We don’t have a pipeline that exists in this state that’s ready and capable of replacing those workers.”

The report estimates that three out of five openings will require less than a bachelor’s degree, although many will need vocational training, post-secondary certificates, and associate degrees. But the state’s vocational schools and community colleges — many with long waiting lists — don’t have the capacity to meet this demand, the report concluded.

Vocational schools, for example, are projected to graduate less than a quarter of the 43,000 workers needed by construction firms alone by 2022. The report, which examined US Census data, Labor Department employment projections, and enrollments at the state’s vocational schools, was commissioned by the Massachusetts School Building Authority, a quasi-public agency that finances school construction. The authority sought the study because it has been inundated with funding requests from vocational schools seeking to expand, said Barry Bluestone, a Northeastern economics professor and one of the report’s authors.

‘Where we’ve really dropped the ball is in community colleges and vocational schools across the state. We need to boost that up.’ Barry Bluestone, Northeastern University economics professor and report co-author

This is the first time the Northeastern economists have looked at the numbers this way. College graduates remain a desirable commodity, of course, but it’s surprising that so many jobs need less than a bachelor’s degree, and many just a high school diploma. Bluestone said the study underscores that Massachusetts needs to spend more on vocational education. One vocational school advocacy group has said the state has not built a new, freestanding vocational and technical school in 30 years.

“Where we’ve really dropped the ball is in community colleges and vocational schools across the state,” Bluestone said. “We need to boost that up.”

Worker shortages are already being felt at Tufts University’s Cummings School of Veterinary Medicine in North Grafton. Virginia Rentko, the medical director, said the school, which operates an animal hospital, can’t keep shifts filled with veterinary assistants, who typically receive community college training, and animal care attendants, who graduate from animal care programs at vocational schools. The animal hospital usually has multiple openings for these jobs, which pay between $16 and $30 an hour. Right now, there are two vacancies.

The lack of capacity in vocational education has created bottlenecks for students as well as employers. Last year, a study by the Northeastern University School of Law found long waiting lists at 21 of the state’s 31 vocational schools, with the problem most acute in communities with high unemployment and large minority populations.

New Bedford Vocational Technical High School, for example, turned away 500 students in 2013 because it didn’t have room, and the Roger L. Putnam Vocational and Technical Academy in Springfield had a waiting list of more than 300. New Bedford’s unemployment rate is 7.7 percent, and Springfield’s 8.5 percent, compared with a 4.6 percent state average. In Boston, the only vocational-technical high school, Madison Park, has a history as one of the worst-performing in the state, and a shrinking student population.

The demand for those graduates will be great, according to the Northeastern report. Employers are expected to need to fill about 40,000 openings for health care practitioners, such as technicians and nursing assistants; 150,000 food preparation jobs; and 34,000 building and maintenance positions.

Ronald L. Walker II, secretary of the state Executive Office of Labor and Workforce Development, said companies such as pharmacy chain CVS Health Corp. of Woonsocket, R.I., and gun maker Smith & Wesson Holding Corp. of Springfield have come to the agency needing help in finding qualified workers. He said the Baker administration is interested in improving the worker pipeline, including expanding programs offered by the state’s network of career training centers.

“I’ve been talking to employers in finance and health care industries about what needs they have,” Walker said. “And they want more access to a skilled workforce.”

For workers who obtain the right skills, opportunities should be plentiful, according to the report. Morgan Curtis, of Canton, who is in her 20s, took a few college courses before she quit her full-time waitress job three years ago to have a baby.Earlier this year, she enrolled in a program at Jewish Vocational Service, a nonprofit employment services agency in Boston, taking refresher courses in high school science and math to gain a spot in a Quincy College certificate program for biotechnology lab technicians.

Curtis completed the certificate program one week ago and was offered a scholarship to continue studying for her associate’s degree. She said she’s also applying for biotech jobs with starting pay of about $20 an hour because there is no shortage of openings.

“I’ve never had this many options,” Curtis said. “I’m so excited.”